Unleash the Minions with Hedgetrimmers!

After a little over a year, it’s official: “Power Tools in the Sacred Grove”, the sequel to “Camp Arcanum”, is available. It has all the magick and twice the sex and power tools of the first volume.

After only a few weeks in Arcanum Ohio, Marc Sindri finds himself in love with Brenwyn the witch; hospitalized by Jeremiah Stone’s sex-conjured demon; and woefully behind in his construction deadlines to open the new renaissance faire by May first. Moving in with Brenwyn for protection from further supernatural attacks during his rehabilitation, Marc delegates the work on Arcanum Faire to his minions, Eleazar the ren faire libertine and Michael the overwrought artisan.

The path to the faire’s opening day is not smooth, obstructed by invisible tentacle demons, undead skinless bunnies, interference from OSHA and even the Vatican, but Marc slowly recovers. With luck, he will soon be healthy enough to lift a chainsaw or survive sex. Through a vegan Thanksgiving, a tool-bedecked Christmas, and lovers’ spats with a woman that can throw lightning bolts, Marc makes his way mostly unscathed.

If only his semi-erotic dream about hedgetrimmers and a sacred grove didn’t end up leaking into Brenwyn’s sleeping mind.

I am already currently working on the third book, its working title “The Beltane Faire”. It will prove to be as great a battle between Good and Evil as Pellenor Fields, if fought between reanimated road kill and renaissance faire performers.

This week we have been busy on the publicity front. The nice people at Dread Central have arranged to publish an excerpt from Camp Arcanum and give away an autographed copy of the novel of sex, magick, and power tools complete with the special shovel and pentacle charms. You can catch that here:

I also get to do an author’s confession and electronic giveaway on I Smell Sheep, a blog near and dear to me for my son’s nickname Sheep. Those goodies are not up yet, but here is their main site:

and you thought the undead skinless bunnies were all made up…

Camp Arcanum at the Wicked Library

Yesterday was the official launch for Camp Arcanum, an occult comedy of sex, magick and power tools. Tomorrow, an excerpt will play on The Wicked Library podcast. It is a section with plenty of sex and magick, but only hand tools to fill out the novel’s promise. Nelson Pyles does a terrific job reading and presenting it. You’ll never look at moonlit sex magick ritual the same way again.

Check out episode 407 at the link below: 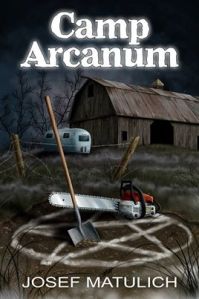 By the way, Happy Equinox to the paganly inclined.

Woke up this morning to get the email that the Big Name Author who used to be in my writer’s group was able to give me a short blurb. I then emailed and IMed said blurb to my publisher, who eventually responded with a huge smily face.

On top of that, in my morning shower and on the drive into work the little light bulb came on twice, illuminating valuable plotpoints for my next two novels in progress. It’s amazing how well your mind works when you are hopeful and validated.

Getting back to the dirt-under-the-fingernails business of writer’s self-promotion, “Camp Arcanum” is now available for pre-order or immediate e-book order through Post Mortem Press. Just follow the bouncing hyperlink: http://t.co/3S9LgTCf3K

It’s an occult comedy about sex, magick and power tools. Everybody should buy a copy, unless you are offended by that sort of thing. In that case, buy two and burn them.